Isabelle researches ways to animate inanimate materials in order to create ‘performative’ sculptures. These sculptures transform physically along their own agency, metabolism, and behavior – over the course of several weeks and months, a time span that can last from one to several exhibitions. Isabelle Andriessen states that her and the Cronin Group’s work deal with overlapping research questions while the approaches and results are very different from each other. 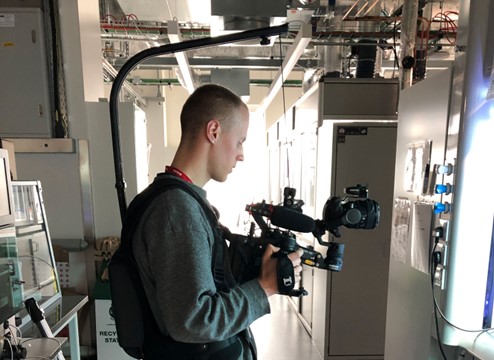 Behind the scenes during the Isabelle Andriessen Residency (Photo: I. Andriessen)

The surrealist science-fiction film produced by Andriessen, portrays the Cronin Lab as an abandoned place, where automated machines processing chemical substances (including instruments that would be able to build living material from chemical non-living material) are running in full speed, attempting to communicate with aliens, and other non-human entities. On the verge of an apocalyptic event, the protagonist, that might be an automata itself, calibrates the sequence of events and navigates its surroundings and way in this abandoned place, piecing back together previously what happened during these events.

With this work, Andriessen aims to raise some critical questions such as:

“What would happen if these instruments in the lab are left running on their own account, on our planet, or left on after a space expedition? What if these ‘chemputers’ get hacked or controlled by a virus or immortal cell mutation? What is the dystopia contained in these processes? In what ways could the self-assembly theorem, as formulated by Lee Cronin, influence future life forms, and how would they emerge? Can synthetic materials develop memory and consciousness? I believe it is this friction, or this space addressed by this friction, where this sublime aspect of Cronins theories can creep under the skin.”

One of the goals of Lee Cronin is to implement AI, robotic platforms, and various forms of automatization to the chemistry lab. In her film, Isabelle Andriessen extrapolates this goal to the very end, resulting in images from the lab that are completely devoid of any human being. In the film it seems as if the machines have taken over the lab and are either creating life like products, or that the machines themselves become sort of alive.